In every culture food lies at the center of a complex value system that involves religious beliefs and rituals, social hierarchies, and gender distinctions. Food is the cement that binds groups together, but it also separates individuals according to age, wealth, status, and gender. Far from a natural product, food is a social construction and can only be “read” in specific cultural contexts. For example, the great 19th century French historian Jules Michelet attributed the French revolution to the consumption of coffee, but today coffee signifies the rest and relaxation associated with “coffee breaks.” Food connects the living with the dead and even with the gods. While the food that women provide will keep one alive, only male food offers eternal life. Food taboos are a central aspect of ancient as well as modern cultures and religions. Why do some foods pollute and not others? What makes us cringe at the thought of eating grasshoppers and worms, while other people relish both? And why are foods gendered, even eroticized? Finally, we are not only what we eat but how we eat and how we produce, distribute, and consume the food we eat. What therefore are the effects of our modern industrial form of food production on the animals we raise and eat, on our environment, and on our own bodies? In this regard, a “chicken McNugget” tells us a lot about modern food, modern life, and modern eating habits in the US, while a nice, ripe wedge of brie cheese and a glass of red wine would make us think of France. It is the purpose of this course to introduce students to the varied ethical, religious, and cultural meanings food has had across the centuries and globe as well as to its physical effects.

Course description: This course surveys the history, practices, beliefs, texts, and traditions of Judaism both as a global phenomenon and as a part of American culture. We will ask two seemingly simple questions: what is Judaism, and who is a Jew? The answers, however, are far from simple. Students will examine how various Jewish communities across history and the world have shaped their practices and beliefs within their own specific sociohistorical circumstances, and how they have understood their identity as Jews alongside their other racial, ethnic, and cultural identities. Students will critically examine a range of primary sources (including the Hebrew Bible, Dead Sea Scrolls, the Talmud, the Zohar, and modern rabbinic responsa [rulings], including from contemporary American contexts), and discuss topics like observance of holidays, dietary laws, diverse ideals regarding family life and sexual behavior, and relationships with other religious and cultural groups. Students will explore how Jewish identity, textual traditions, religious practices, race and ethnicity, and political circumstances combine to define “Judaism” differently in diverse times and places. The course will also give students an opportunity to discuss and complicate a foundational question of Religious Studies -- what is a "religion"? -- through the study of Judaism and Jewishness, which has been defined in various contexts not only through the category of religion, but also in terms of race, ethnicity, nationhood, peoplehood, tradition, and culture.

RST 130 - Topics: Polytheism, Paganism, and the Anti-Christ: Misconceptions of the Religious Other from Antiquity to the Modern Age
Cai Thorman
> Course flyer (pdf)
Please contact the instructor if you have difficulty enrolling: cthorman@ucdavis.edu

Course Description: Since the advent of Christianity, pagans have had an unfortunate reputation. Yet prior to Christianity in the Near Eastern and Greco-Roman worlds, polytheism was the way of the world. How did polytheists come to be called pagans? What does Neo-Pagan mean today? After a developing a grounded understanding of ancient Mediterranean polytheism, with a special look at mystery cults and magic, this course will take a tour through early Christian demonization of pagans, early modern witch hunts, esotericism, modern satanism, and the emergence of Neo-Paganism (with a brief look at modern Hinduism for comparison), in order to plumb the misconceptions that have both shaped and plagued polytheistic religious practice since the birth of Christianity.

Readings will be provided by the instructor and guest lecturers in electronic format.

This course will examine the ways in which Jain texts and works of art transmit devotional ideas and images. We will look at a range of primary texts, including literature, hymns, and epigraphy as well images in painting and sculpture to elaborate cosmic diagrams and pilgrimage maps. With these primary materials and the aid of secondary scholarship, we will explore themes such as verbal and visual iconicity, aesthetic culture, and notions of embodiment and presence. In doing so, students will not only learn about Jain devotional literature and art, but also ways to interpret them and to think critically about the relationship between text and image.

Course description: This course examines Rāmāyaṇa story traditions with a primary focus on its many literary and oral variants. We will begin with a thorough dive into the Valmiki Ramayana, and will then engage in comparative analysis, engaging literary sources in numerous languages (in translation). The course will tackle questions about ethics, law, moral behavior, gender, social hierarchies, and war.

RST 190 - Seminar: Writing About Religion Inside and Out
Prof. Eva Mroczek

In this course, we will read and write about religion in a variety of nonfiction prose genres, including journalism, personal essays, research articles, and memoirs. We will pay special attention to the "insider/outsider problem" in religious studies. How do we write with respect and integrity about the religious traditions of others? And how do we turn our analytical gaze on our own experiences of religious community, text, and practice? What if these boundaries begin to blur? Reading and discussing examples of powerful American writing about religion will help students develop their distinctive voices, and build the confidence to critically bring their own identities and experiences into their work. 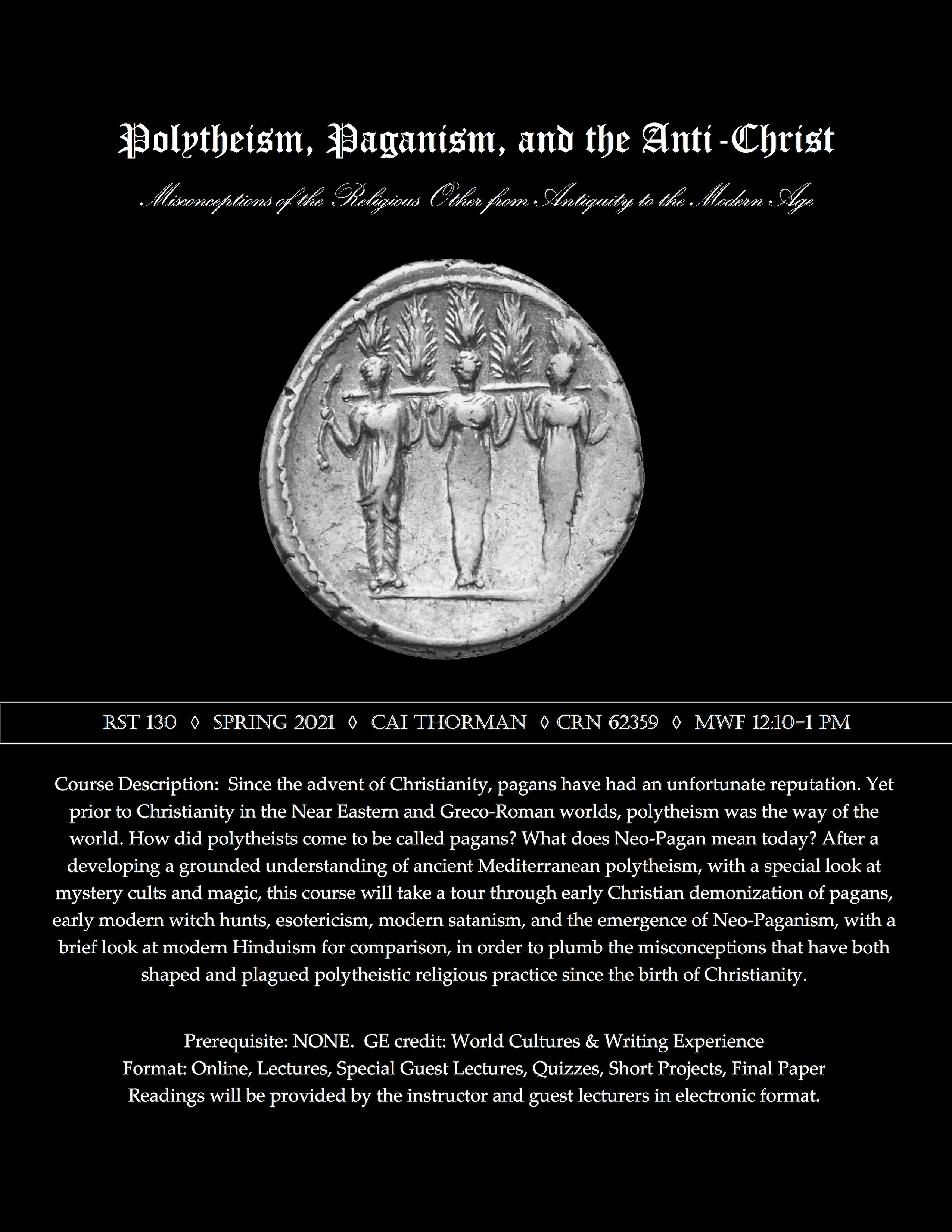